Former Educational Horizons student, River Grace, was recently awarded three prizes for his animal science project at the Intel International Science & Engineering Fair, one of the world’s most prestigious science competitions for high school students. It was held in Phoenix, Arizona.

River won the European Union Young Scientists award, which comes with an all-expenses-paid trip to Belgium for a science conference; the Intel ISEF Best of Show Award, which includes a $5,000 prize; and the first place award in animal sciences with its $3,000 prize.

“I think science has fascinated me for as long as I can remember, because I think it is just so beautiful,” he said.

River said one of the best things about science is the way it can be used “to make the world work,” and the way it helps him understand the “personal questions” that spark his curiosity. 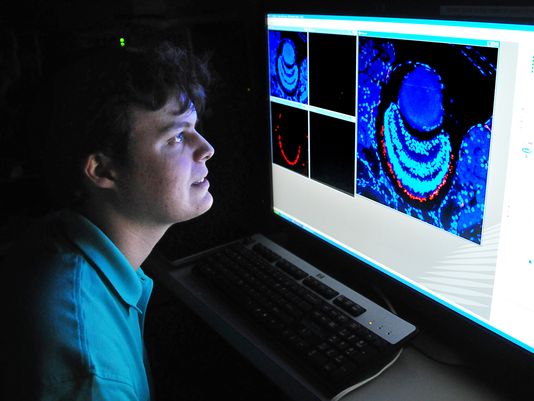 River Grace, former Educational Horizons student, using a laser scanning microscope at Florida Tech while working on his science project the nervous system of the Brahminy blindsnake. He is the winner of three prizes given at the Intel International Science & Engineering Fair this May in Arizona.
(Photo: MALCOLM DENEMARK/FLORIDA TODAY)

River’s science project at the Intel science fair focused on the nervous system of a tiny invasive snake species called the brahminy blindsnake, which has one of the smallest brains of any animal. River used microscopes and behavioral experiments to test the capacity and mechanics of that snake’s brain.

“It has one of the smallest brains of any vertebrate animal, so I figured if I studied their brains, it would give people some insight into how our brains work,” River said.

River was able to show that the blindsnake, which scientists previously thought was blind, actually has vision, and that the snake instinctively avoids light. This finding has important implications for how and why the blindsnake, which eats organisms that are important for soil quality, is so hardy and difficult to kill, and why it is able to invade ecosystems where it causes harm, such as in Florida.

His project, River said, was also inspired by the fact that he loves snakes, and he was fascinated by the brahminy blindsnake when he discovered one in his yard.

River’s father, Michael Grace, is a biology professor at the Florida Institute of Technology and the dean of the university’s college of science, and his mother, Tanya, is a global training manager for General Electric, so River has grown up in a household where science is highly valued.

Michael Grace said his son River has always had a “passion for science” and an interest in academic challenges, and that River won his first science fair when he was 8 years old. “He likes taking on big things and deep things,” Michael Grace said.

Educational Horizons Charter School is located in West Melbourne, Florida. Educational Horizons is a small community-focused Charter School with an emphasis on the Montessori Method. We are proud to be an "A" school within the Brevard Public School system for the past FIVE years!  We also have the rating of a "High Performing School" as well as a "Florida School of Excellence". Kindergarten through sixth grade is … END_OF_DOCUMENT_TOKEN_TO_BE_REPLACED