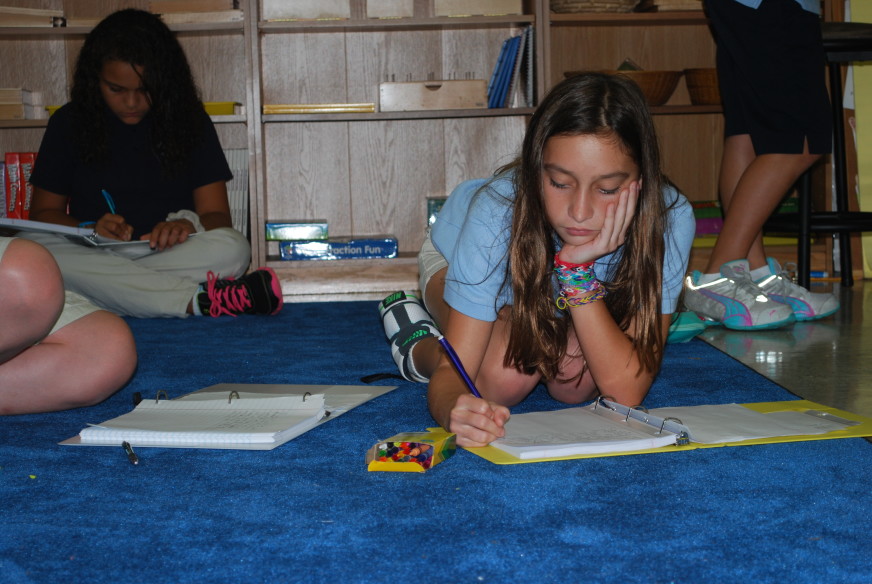 At the beginning of the 20th century, Italy’s first female physician, Maria Montessori, sought to turn education on its head. Using methods developed through her work with developmentally disabled children, Montessori created a ‘child-centered’ approach that emphasizes rich environments, freedom, and respect for the student’s point of view.

“Education is not what the teacher gives,” wrote Montessori, a devout Catholic whose classical empiricism echoes that of St. Thomas Aquinas, in a 1946 book. “Education is a natural process spontaneously carried out by the human individual, and is acquired not by listening to words.”

Instead of emphasizing drills and memorization, with students all doing the same thing at the same time the same way, the Montessori method deploys student-selected work, small-group instruction, a lack of exams and grades, and collaboration, often between students of different ages. Montessori stressed the importance of developing social skills alongside academic ones.

Her approach has caught on. The International Montessori Index estimates that there are some 4,000 certified schools in the United States and about 7,000 worldwide. (‘Montessori’ is not trademarked, and other estimates say there are roughly 20,000 such schools around the globe.) In the United States, this includes hundreds of public schools, as well as some high schools.

But does it actually work? How does a Montessori education stack up to a conventional one?

The evidence tilts in Montessori’s favor. A 2006 study of 112 students in a Montessori school and conventional public schools in Milwaukee found that the Montessori students performed significantly better on both cognitive and social measures.

Half of the students in the study were 5 years old, and half were 12. The Montessori 5-year-olds performed better than those their age at other schools when it came to identifying letters and words, solving basic math problems, and ordering and categorizing. The young Montessori students interacted more positively on the playground and were more likely to deploy reasoning in social negotiations, often with appeals to abstract values such as justice and fairness. The researchers found no differences between the spatial reasoning, vocabulary, and concept formation skills between the two groups of 5-year-olds.

The differences between the two groups of 12-year-olds were less pronounced, but still present. Essays written by Montessori students used more complex sentence structures and were rated as more creative, but the students in the conventional public schools appeared to have “caught up” on many of the researchers’ other measures. The Montessori students tended to select more constructive responses to hypothetical social problems, and they reported feeling a stronger sense of community at their school.

In a 2006 interview with Scientific American, University of Virginia psychologist Angeline Lillard, who led the study, speculated that the less-conspicuous differences in academic performance between the Montessori and non-Montessori 12-year-olds could have been a result of the school being only three years old when the 12-year-olds enrolled back in 1997. Lillard noted that it takes time for a school to put Maria Montessori’s method into practice.

“This was very authentically implemented Montessori,” she told Scientific American. “It’s actually a fairly small percentage of schools that are this strict.

Other studies loosely corroborate Lillard’s findings on the effectiveness of a Montessori education, but they vary in the details. A 2009 study, also in Milwaukee (which is attractive to researchers because students are placed via lottery), found that high school students who had attended a Montessori school performed significantly better on math and science tests, but not in English and social studies.

What accounts for the outcomes among Montessori kids? It could be that the Montessori method teaches them to be more motivated and focused. A 2005 survey of 290 middle-school students by psychologists Kevin Rathunde and Mihaly Csikszentmihalyi found that the Montessori students were more likely to report being driven by an interest in academic tasks, and that they were more likely to report getting joyfully immersed – feeling “in the zone” – when doing their work.

Such finding would be very much in line with Montessori’s educational philosophy, which emphasizes devoting long uninterrupted blocks of time to tasks. “The child who concentrates,” wrote Montessori in her book The Absorbent Mind, “is immensely happy.”

The same holds true for adults, even into old age. A number of studies have found that Montessori-based activities can benefit the elderly, particularly those experiencing dementia.

Taking the perspective of a toddler writing to a parent, Goertz describes how demanding child-centered learning can be. She writes:

“I want to be like you. I want to be just like you, but I want to become like you in my own way, in my own time, and by my own efforts. I want to watch you and imitate you. I do not want to listen to you except for a few words at a time, unless you don’t know I’m listening. I want to struggle, to make a grand effort with something very difficult, something I cannot master immediately. I want you to clear the way for my efforts, to give me the materials and supplies that will allow success to follow initial difficulty. I want you to observe me and see if I need a better tool, an instrument more my size, a taller, safer stepladder, a lower table, a container I can open by myself, a lower shelf, or a clearer demonstration of the process. I don’t want you to do it for me or rush me or feel sorry for me or praise me. Just be quiet and show me how to do it slowly, very slowly.”

Goertz’s essay is directed at parents, not teachers, but it’s easy to see how only the most skilled and patient educators can consistently adhere to this method, even as the child is ultimately leading the way.

Originally published on The Christian Science Monitor by Eoin O’Carroll

Educational Horizons Charter School is located in West Melbourne, Florida. Educational Horizons is a small community-focused Charter School with an emphasis on the Montessori Method. We are proud to be an "A" school within the Brevard Public School system for the past FIVE years!  We also have the rating of a "High Performing School" as well as a "Florida School of Excellence". Kindergarten through sixth grade is … END_OF_DOCUMENT_TOKEN_TO_BE_REPLACED