Congratulations to our four candidates for the Southern District Science Fair! 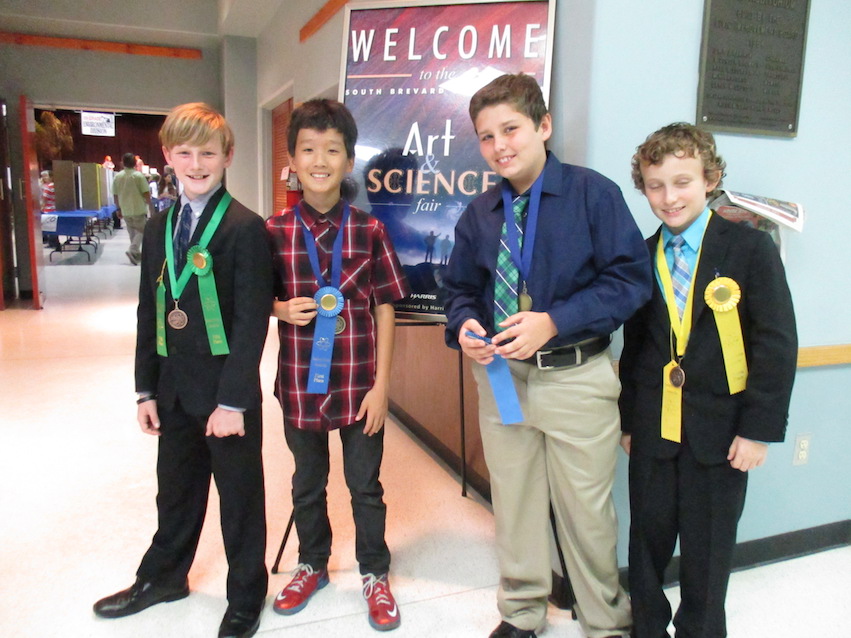 Each won first place at the school level for their division and grade. Next they displayed their projects and met with judges for an interview. 100% of those invited to the event received medals! We are all so very proud of their accomplishments.

Ethan in grade 5 did a biological project entitled, “Pump it Up!” He focused on heart rate when swimming compared to at rest. He earned a fifth place medal for his efforts.

Connor in grade 6 put together an environmental project about evaporation rates and creatively looked at how to keep water in large areas constant. His impact on the environment earned him first place in his division as well as Harris Best of Show!

Anthony in grade 5 also did an environmental project focusing on the Indian River Lagoon. His project entitled, “The Eutrophication of our Estuary”, looked at sea lettuce and the effect of fertilizer in the water. He earned first place for his project.

Lucas in grade 4 developed a biological project looking at bacteria in the mouths of dogs, cats and humans. He earned a fourth place medal for his project.

Thank you to their families for the support needed to earn this success.

Educational Horizons Charter School is located in West Melbourne, Florida. Educational Horizons is a small community-focused Charter School with an emphasis on the Montessori Method. We are proud to be an "A" school within the Brevard Public School system for the past FIVE years!  We also have the rating of a "High Performing School" as well as a "Florida School of Excellence". Kindergarten through sixth grade is … END_OF_DOCUMENT_TOKEN_TO_BE_REPLACED